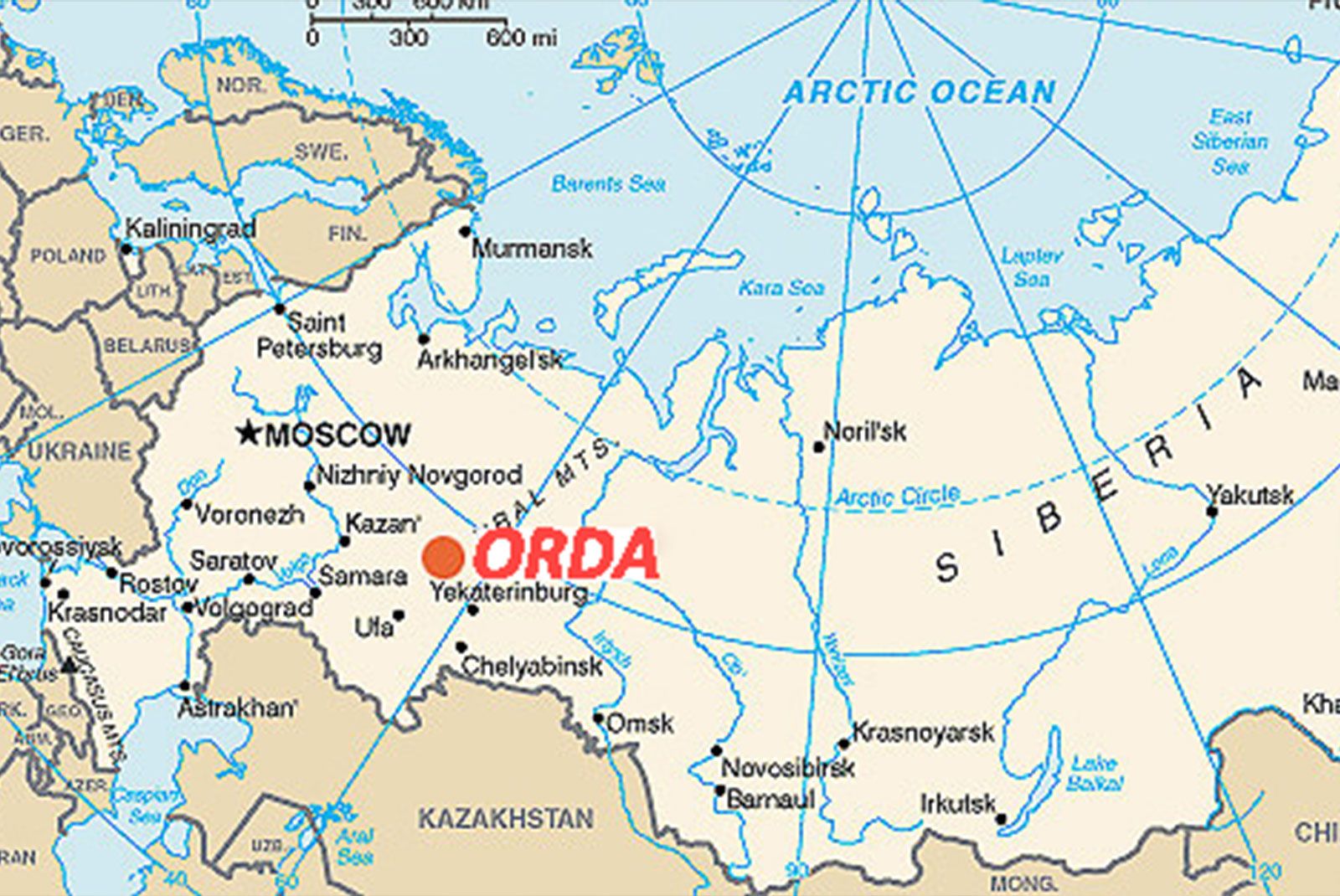 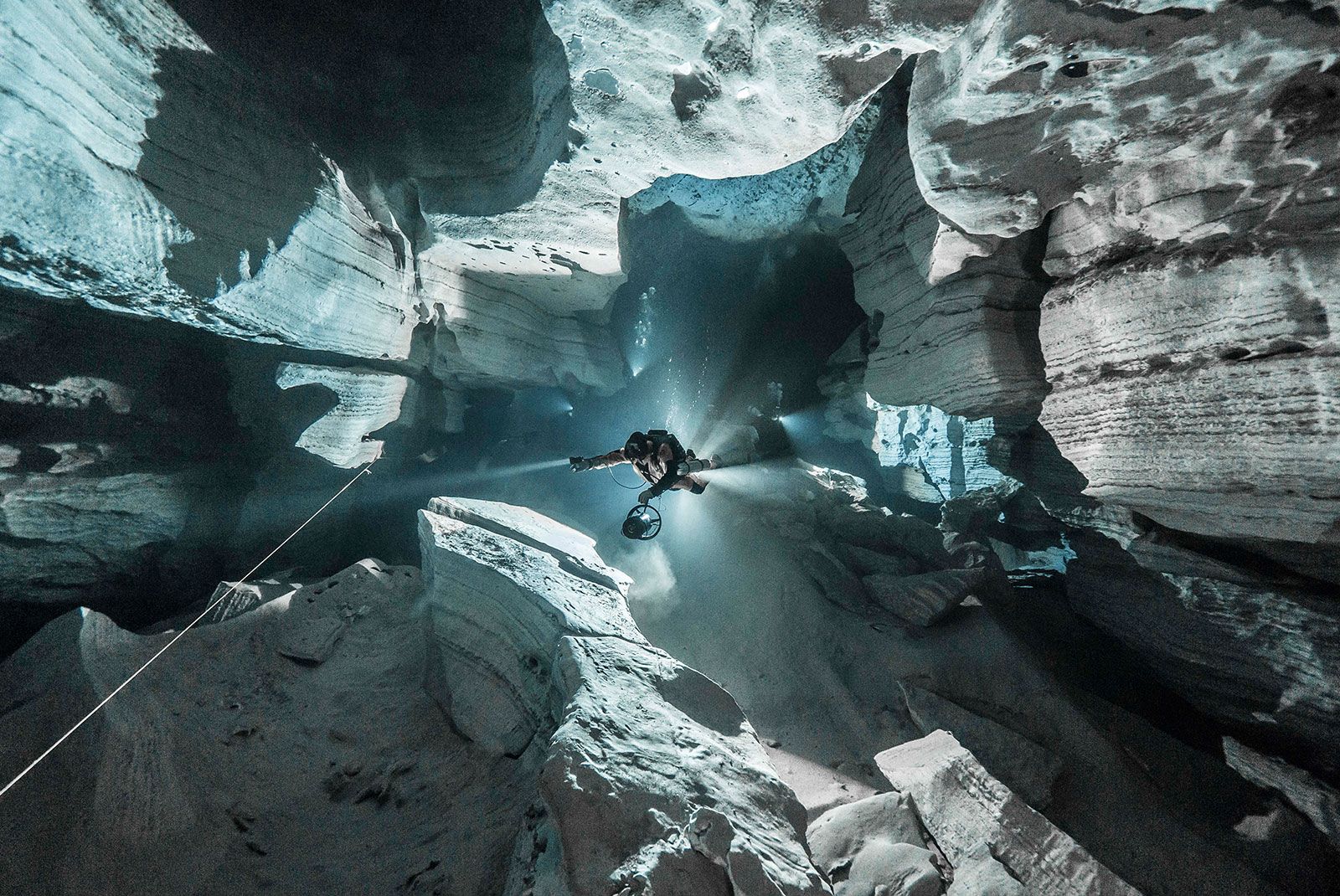 Orda Cave is the longest underwater labyrinth of corridors and chambers known in Russia. And what makes it really special is the fact that it is a gypsum cave which means the interior does not resemble typical caves with the presence of stalactites and stalagmites. 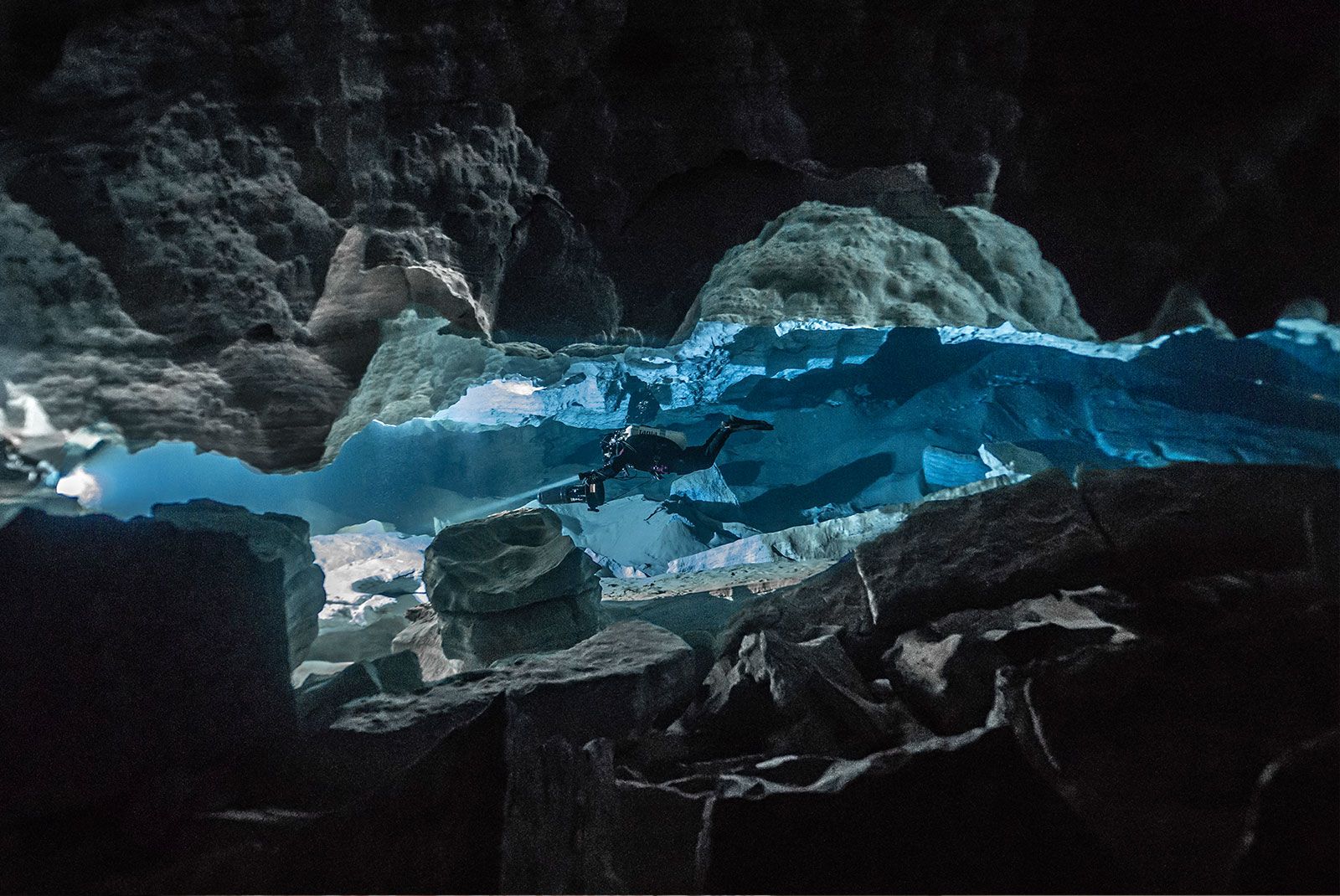 The Mirecle of the Ural

In the Orda Cave rock formations are arranged in the form of gypsum blocks, creating an unparalleled and unique underwater landscape. The miracle of the Ural, as the cave is also known, is located in Russia, right on the border between Europe and Asia, on the western side of the Ural mountains.

You can get there by plane, landing in Perm, and then it takes an approximate 2-hour drive to reach the village of Orda. The entrance to the cave is located about 1.5 km north-west of the village, on a plateau between two rivers: Iren and Kungur (in the form of a fairly large hole in the cliff from the Kungur side). 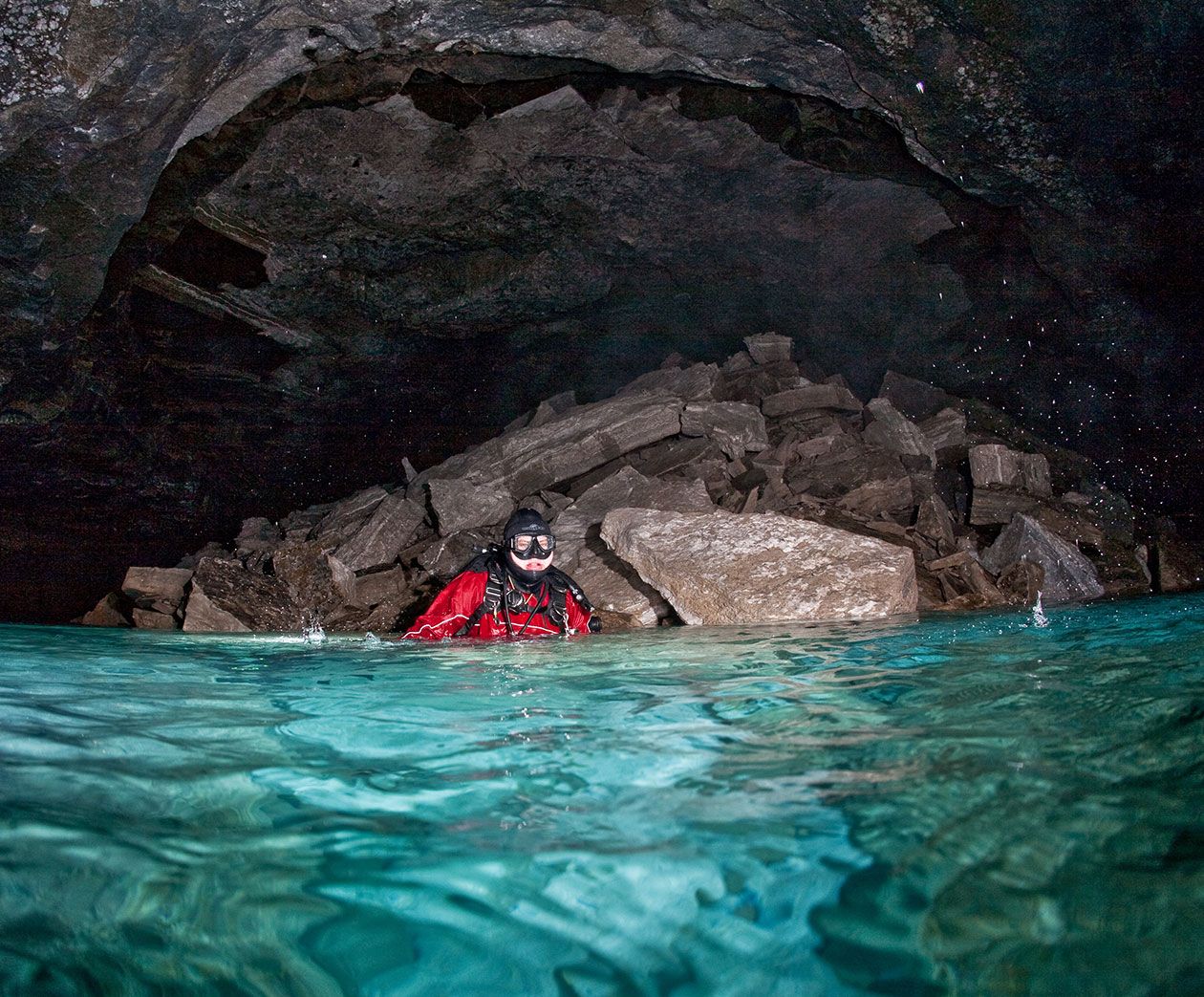 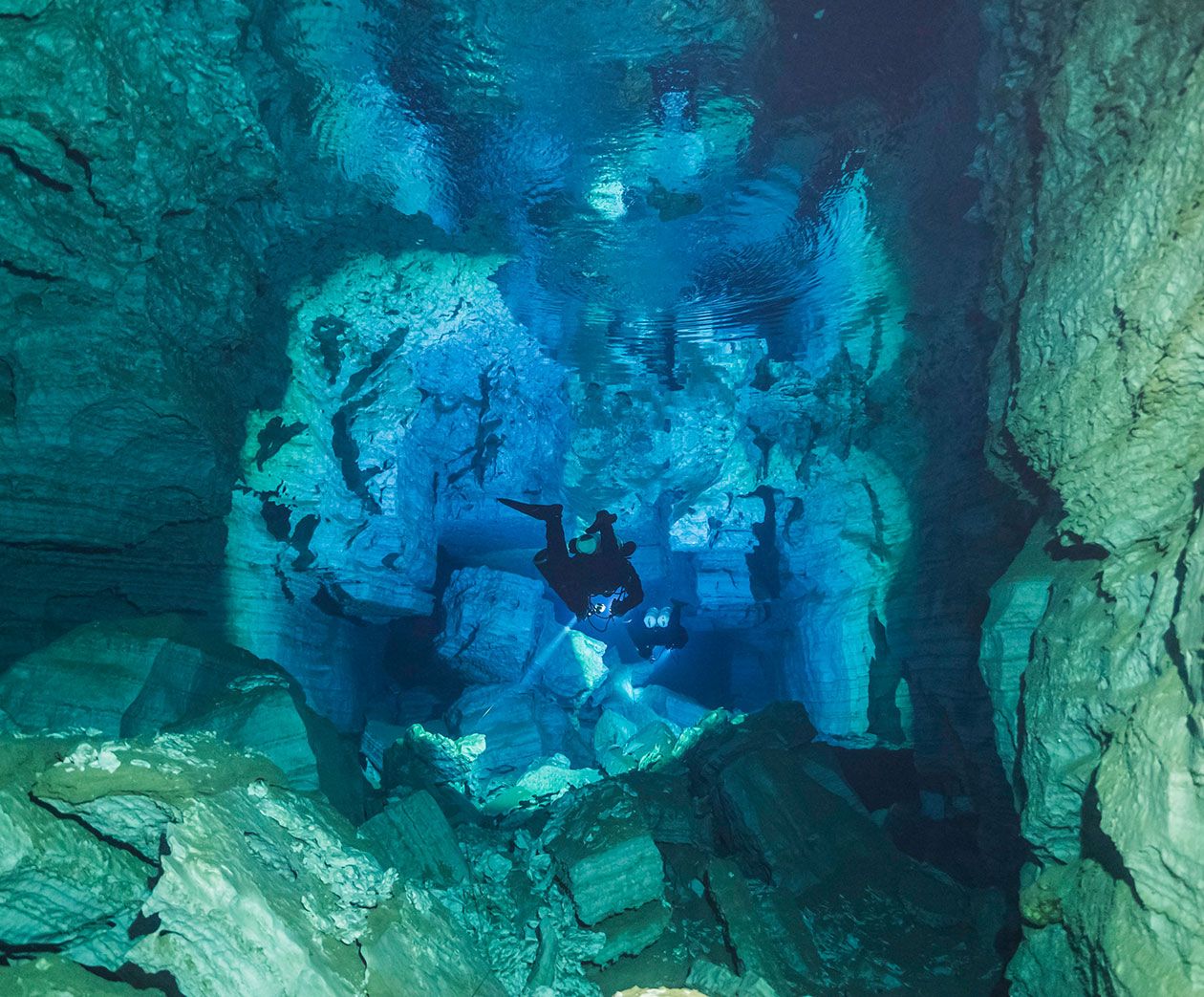 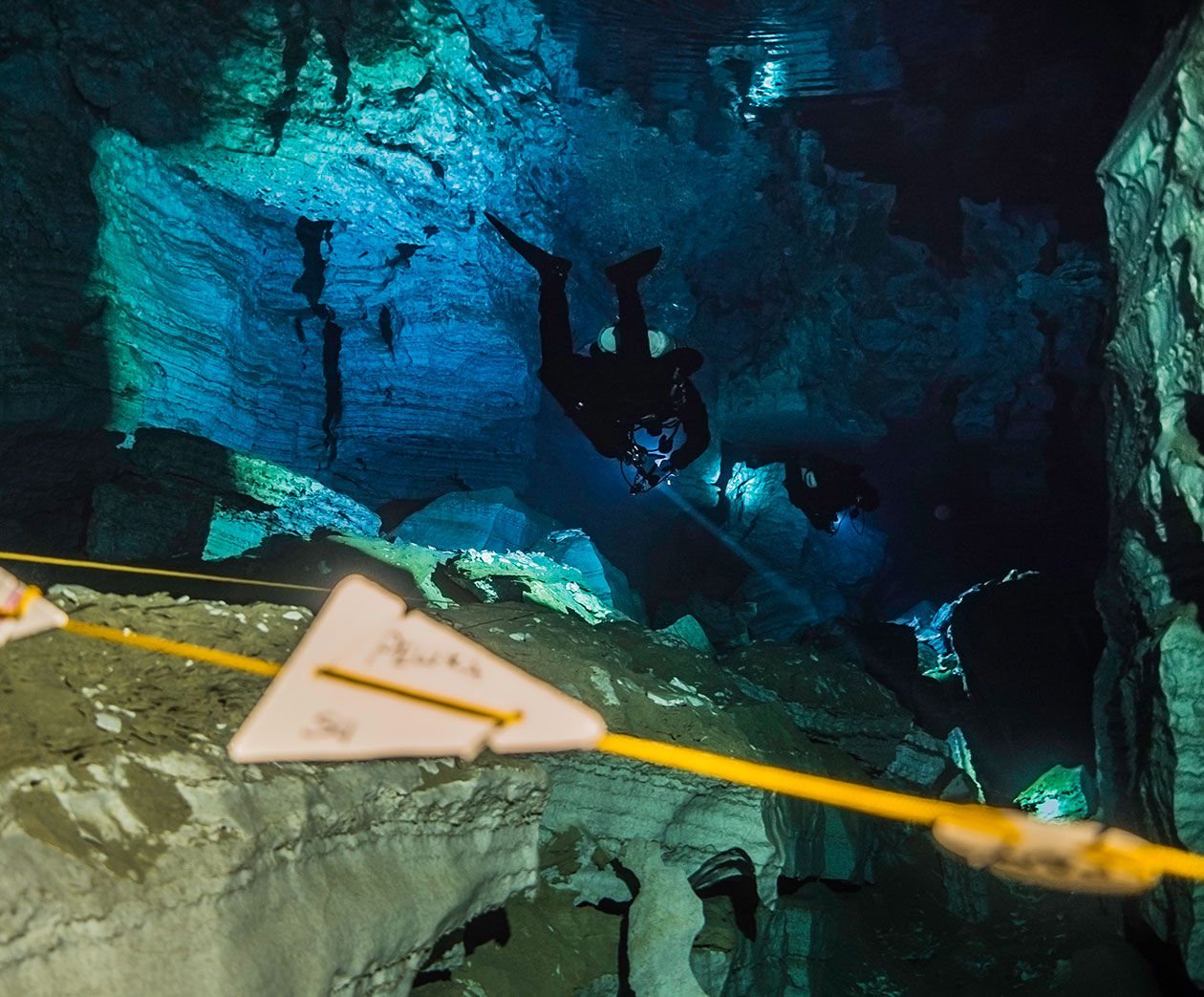 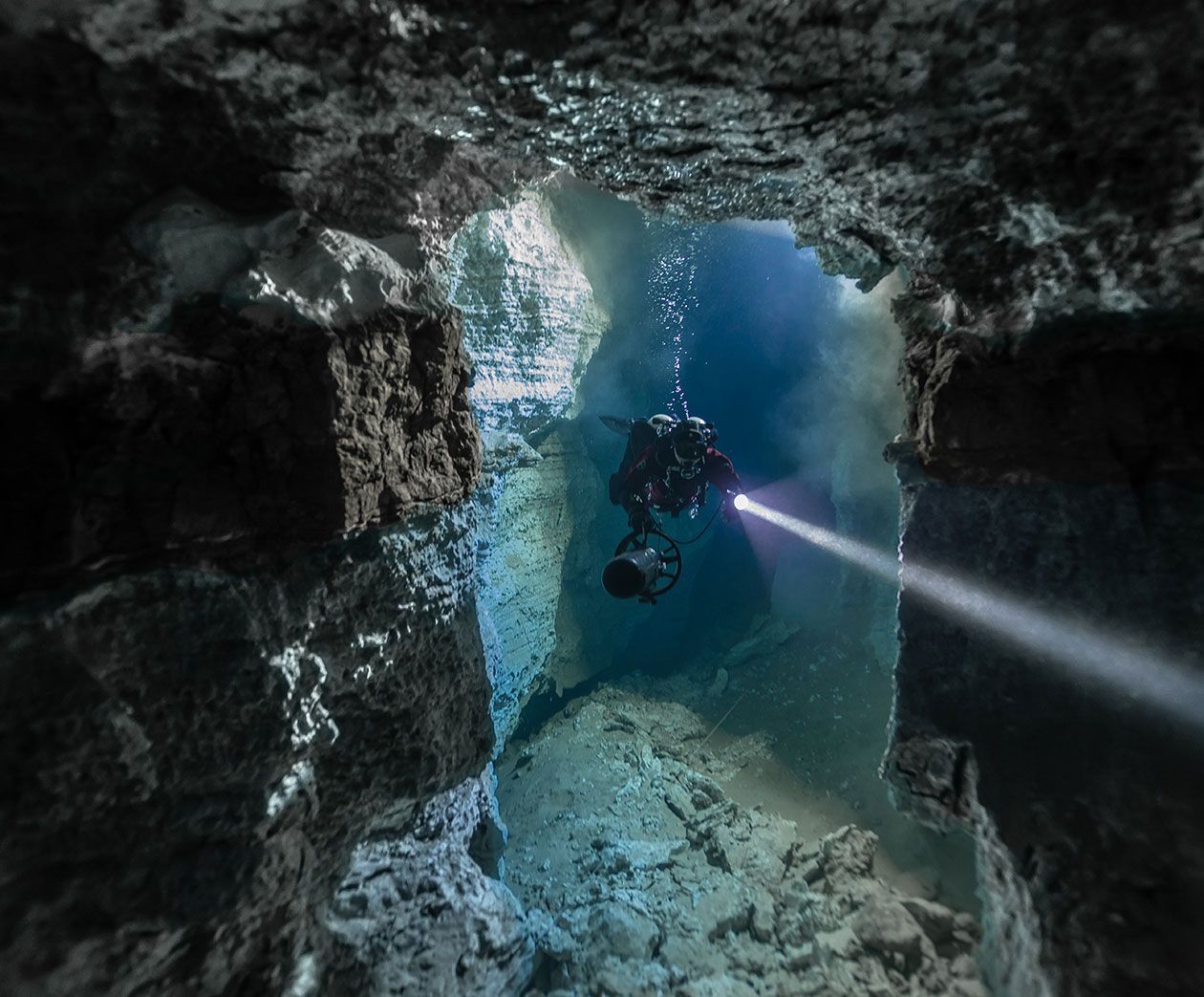 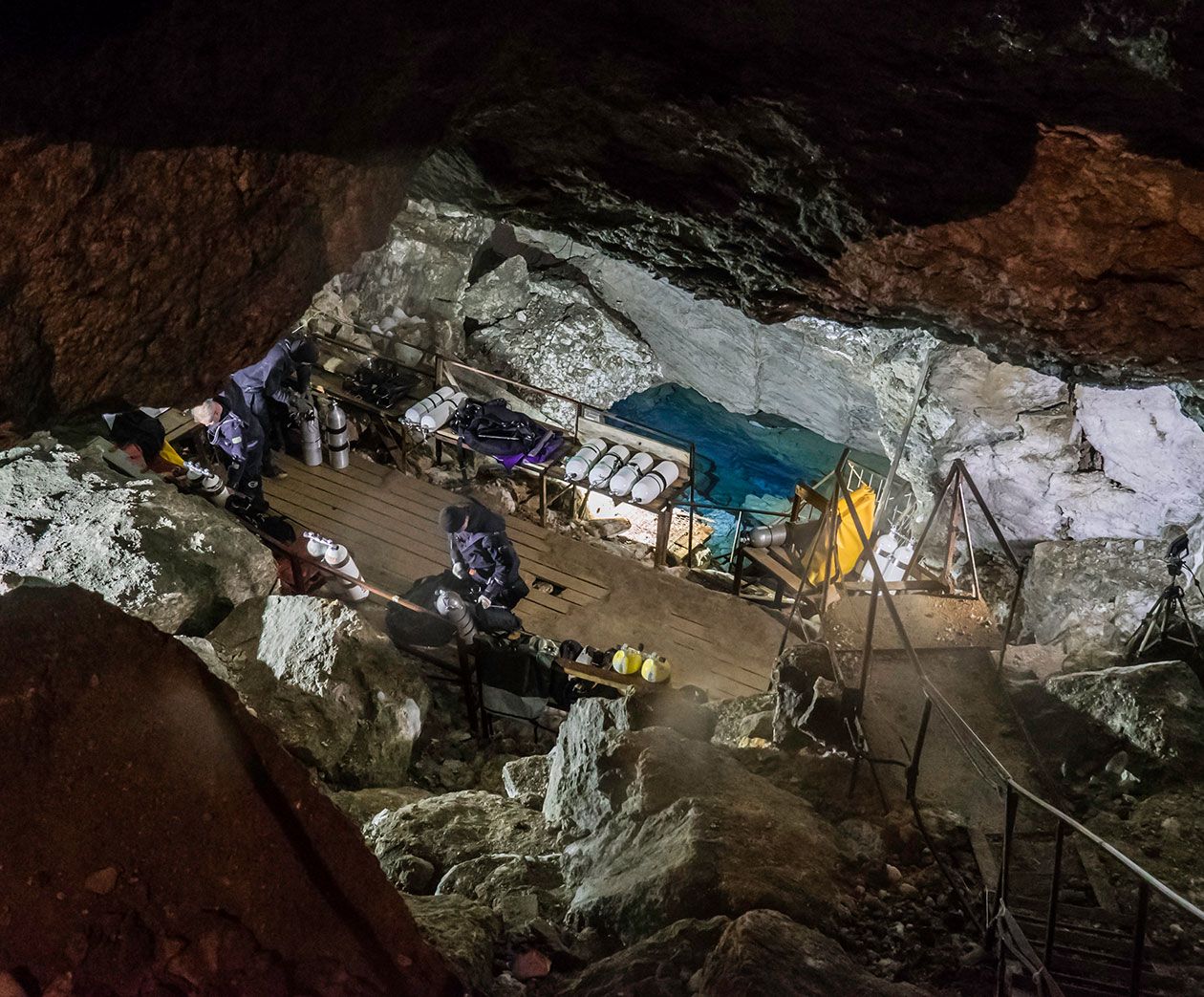 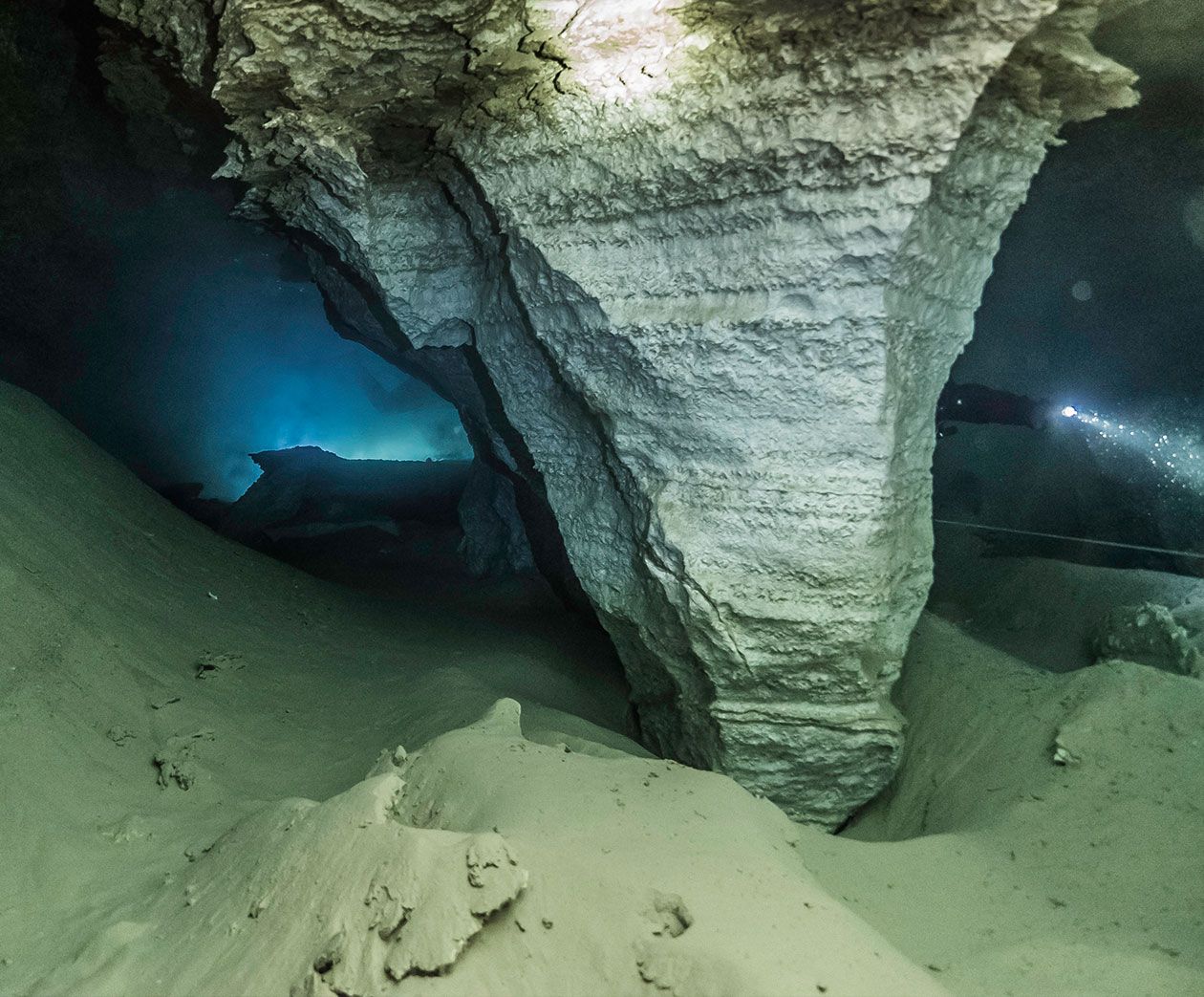 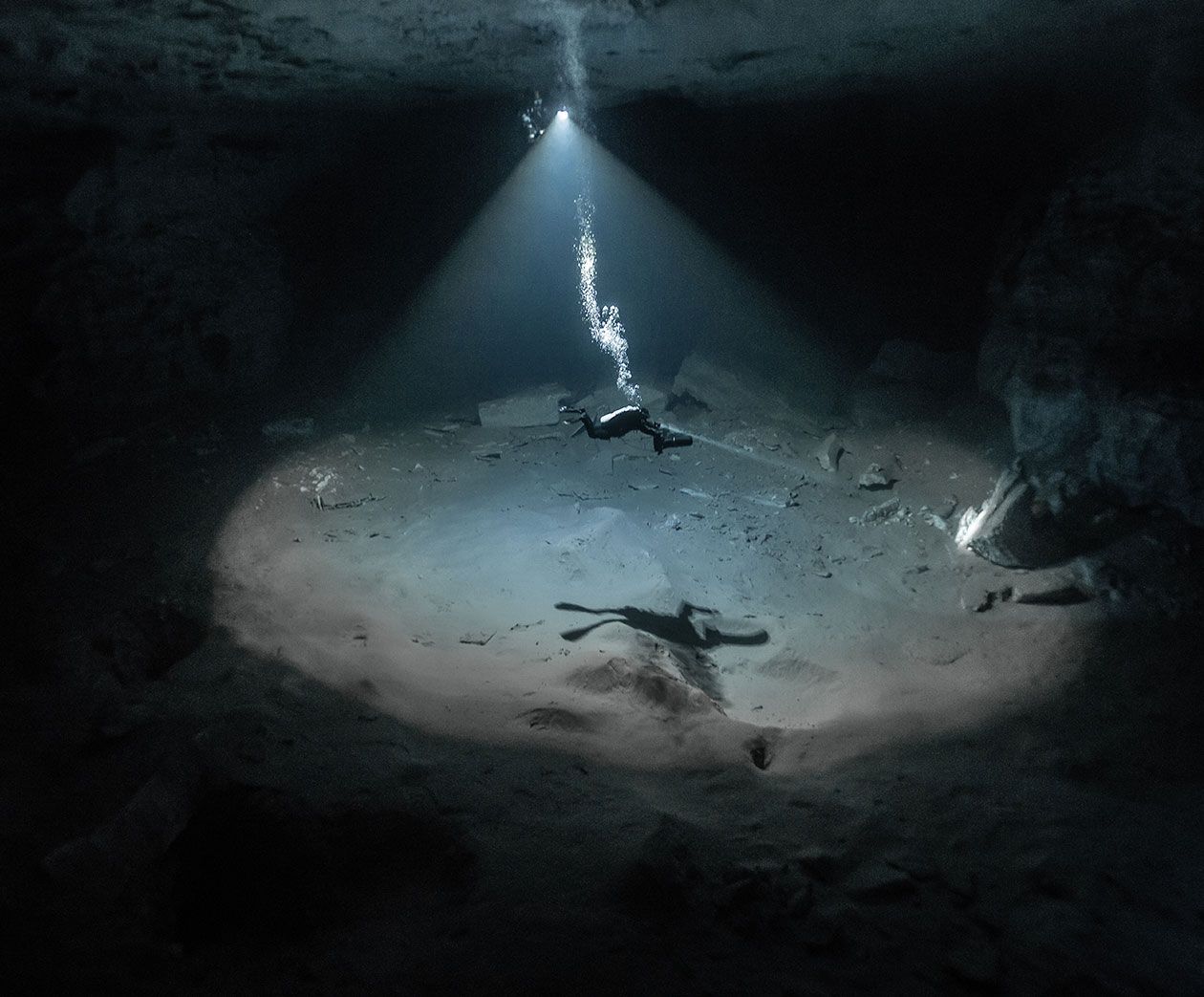 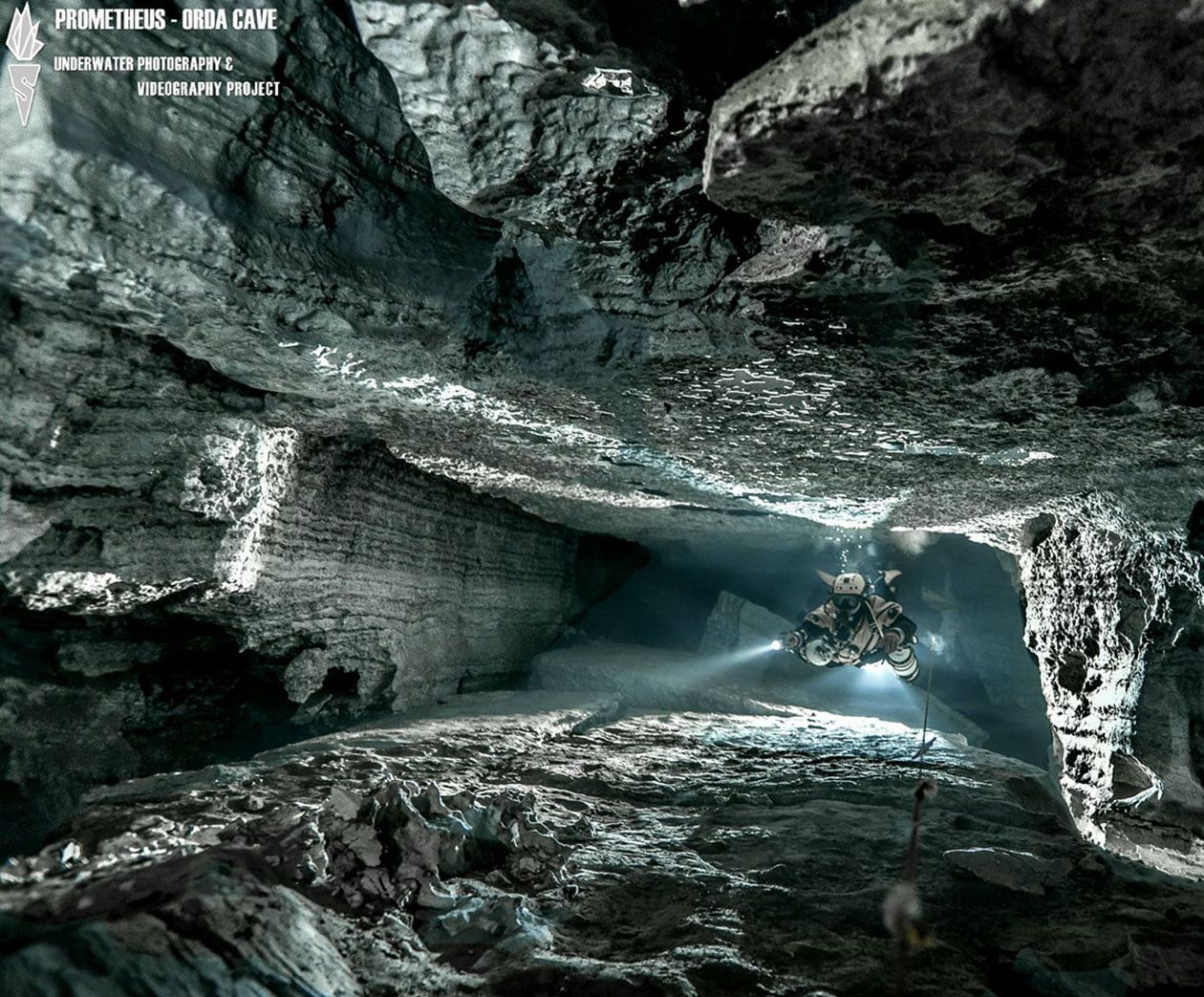 A few words about the history of the cave, specifically about the discovery of it… It could be said that local people have known about the cave for centuries. The first mention of the cave was published in 1969 and in 1993, thanks to Igor Lavrov, a topographic map of the dry part of the cave has been drafted, including 300 meters of corridors, passages and three underwater lakes. In March 1994, cave diver Viktor Komarov undertook the first underwater exploration by diving in a hidden lake inside the cave. He discovered a huge underwater tunnel but decided to keep this information to himself. Since the first dive more and expeditions were undertaken. The place attracted people like no other, it was completely virgin, unexplored and undiscovered inside and therefore completely unsuitable for any sort of tourism or exploration. 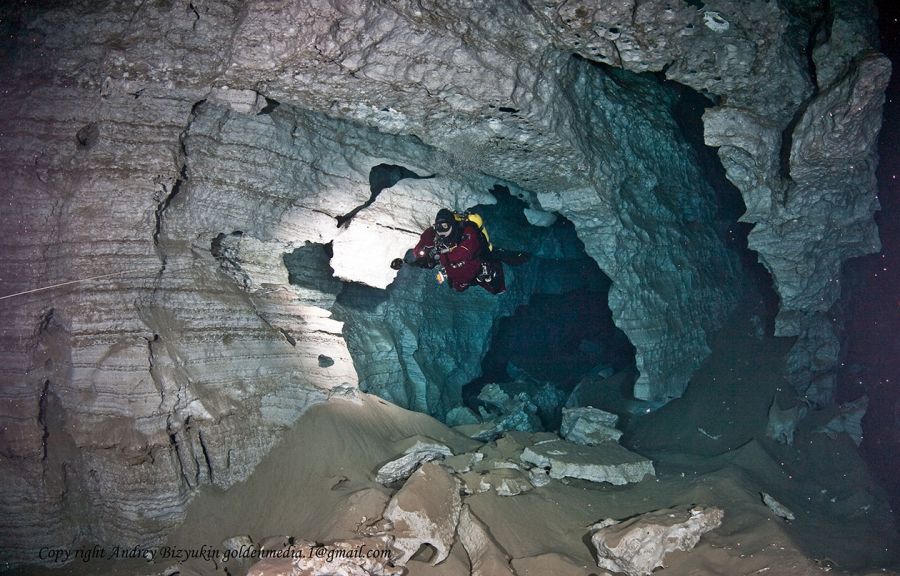 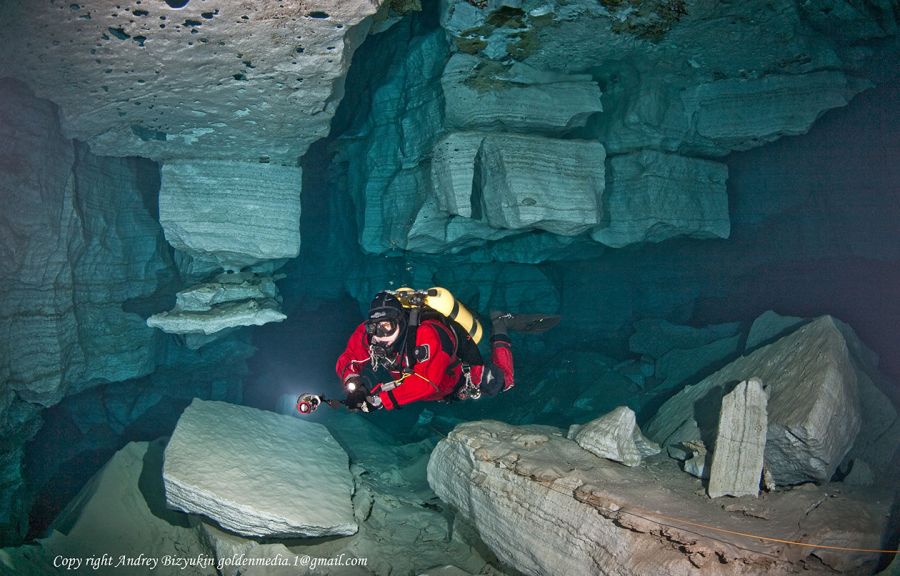 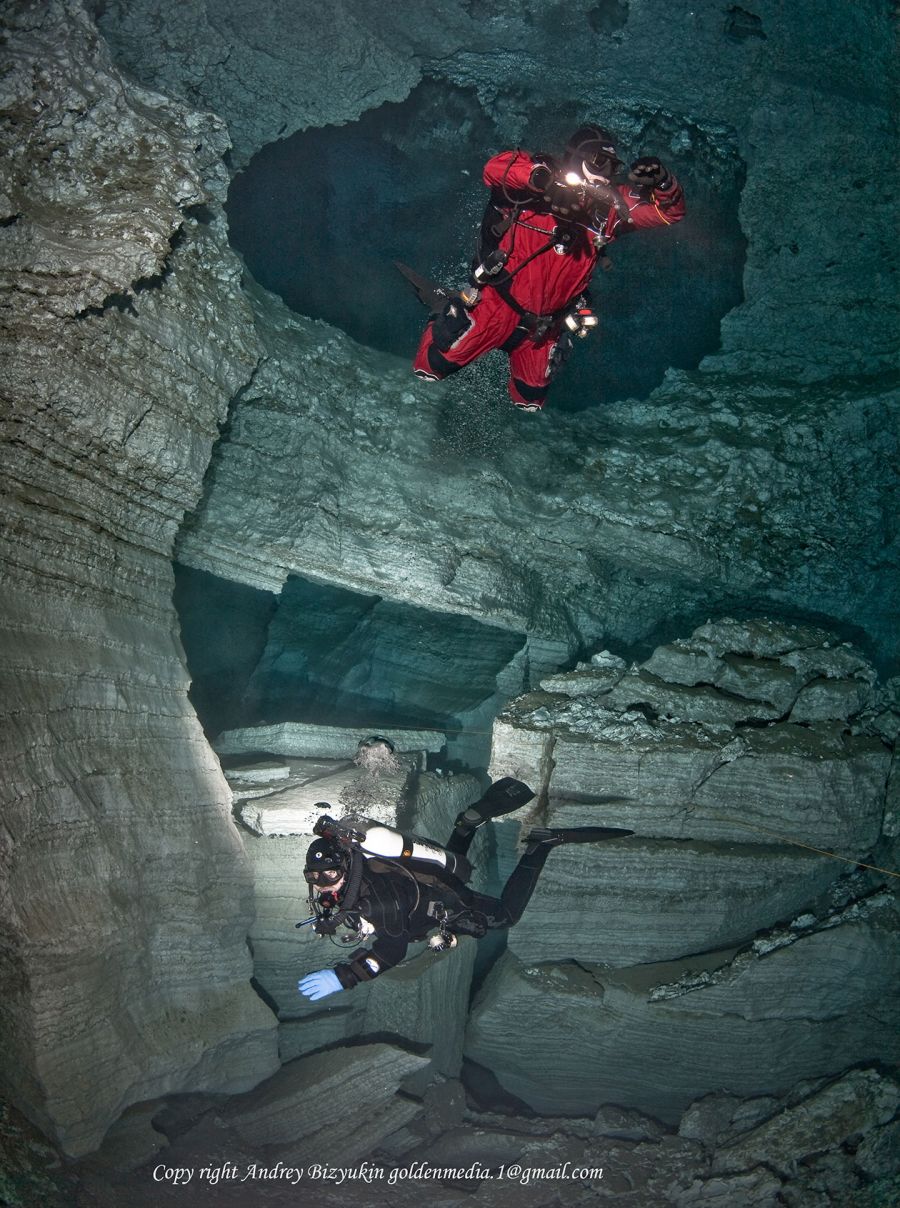 There were no handrails, ropes or steps which would make it safe to submerge. The first explorers had to dive in complete darkness and squeeze through slippery and rocky passages with all their equipment. Today, they talk about this time with amusement and fondness. After all, they have the great satisfaction of being the first people visiting those caves. The techniques and equipment used at the time also seem to make many of today’s cave divers snigger. Most of the first explorers used home-made twin sets with small cylinders, flashlights as well as home-made reels. Eugeny Voidakov, who was the guide of the explorers of 1999, is someone who has contributed hugely to the discovery of new areas of the cave, he found the link between the three underwater lakes and also plotted newly discovered corridors onto the map. The first trained technical divers appeared in the Orda Cave in the year 2000. Today, it is an extremely popular destination and perfectly prepared for small groups of cave divers. The steps lead down about 70m and the entire descent route is equipped with handrails stretching to the furthest corners of the cave. Before entering the water there is a platform for divers and the interior of the cave is, of course, illuminated. The main lake, which is the entrance to the underwater labyrinth, looks fantastic. The water level at the entrance is equal to the water level in the nearby Kungur River. The cave ceiling in the area flooded with water is located at a depth of 6 meters. The average depth of the caves is 15-18 meters, reaching its maximum at 20 meters. Visibility, when moving carefully around the cave is fantastic and reaches up to 45 meters! 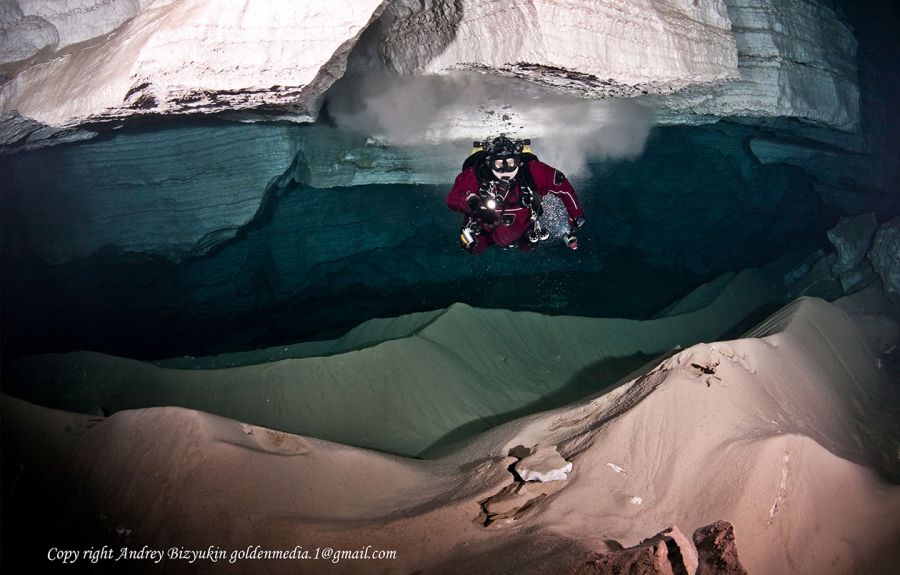 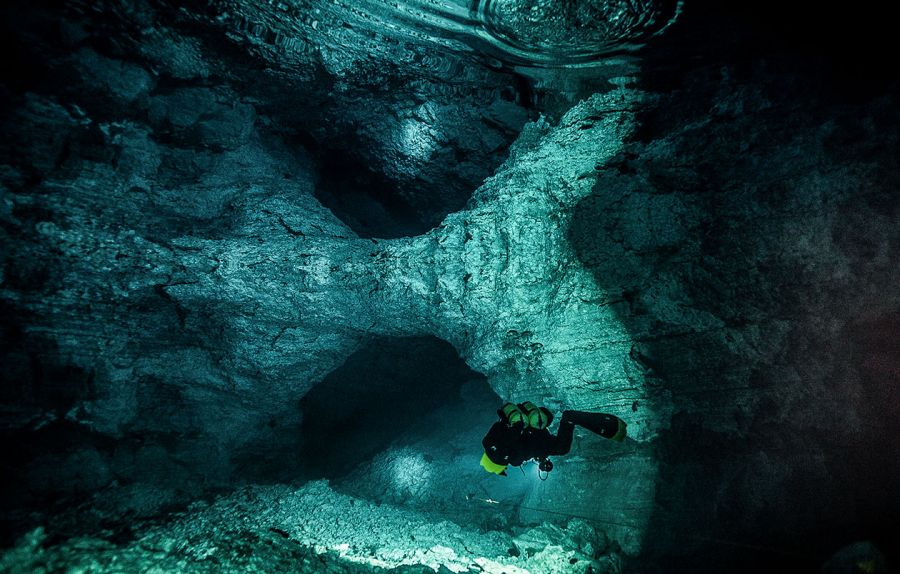 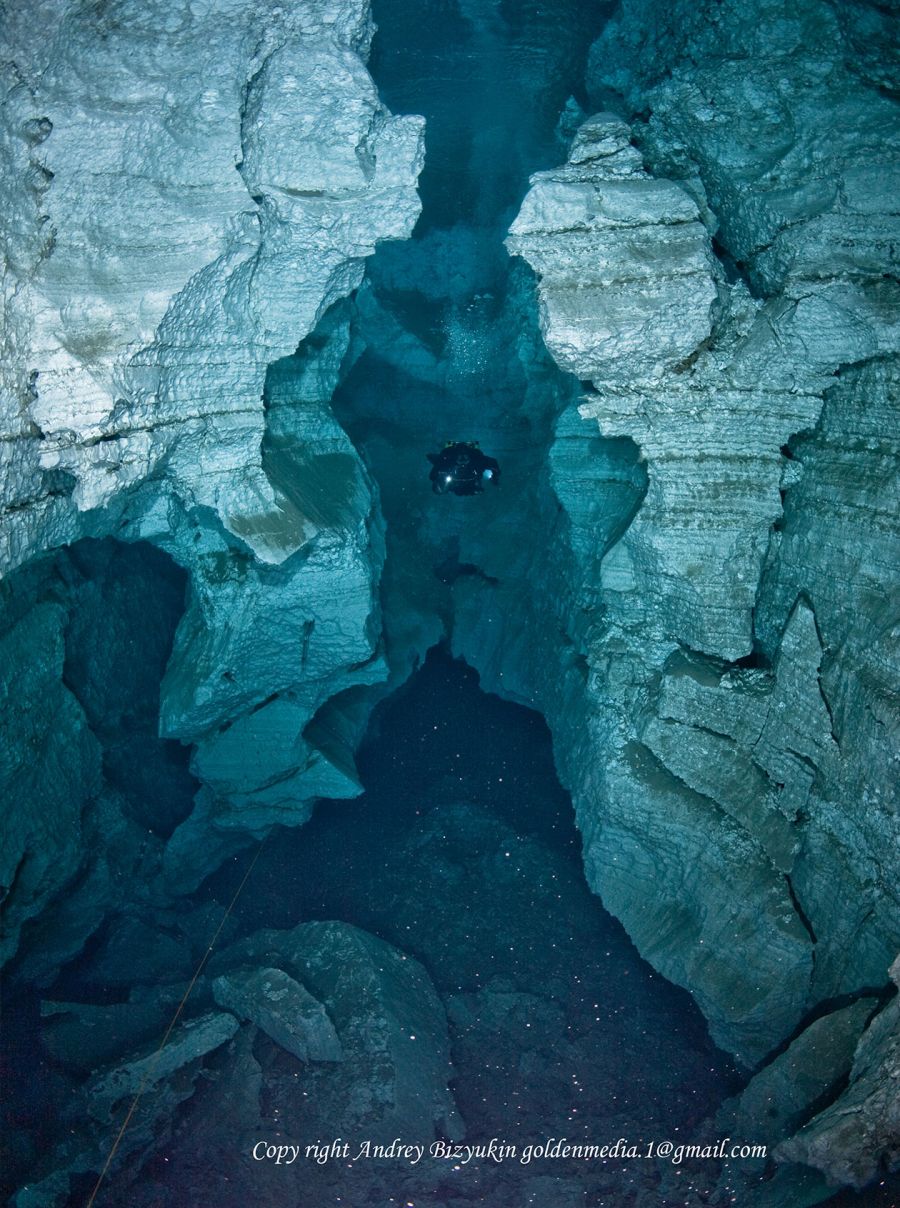 In the Orda Cave, you’ll find breathtaking and unique underwater landscapes that include huge white tunnels and vertical rock cracks, windows in the walls, arches, underwater rock gardens, and other unusual formations. Moving around the cave requires some finesse from the divers, the air exhaled from the regulators (especially when swimming closer to the rock), can react with the gypsum and can cause the forming of cloudy substance. Some of the passages are extremely narrow, but these are rather short sections that provide access to larger rooms that will make even the most experienced cave diver can feel tiny and lost in the dark. One of those narrower passages has been given the name Mousetrap by divers as it gives you a feeling of being squeezed by rocks. In many places of the cave, under the ceiling, you can come across air chambers.
The bottom, however, is mostly muddy as a result of elements of the cave ceiling crumbling. Large pieces of rock can be encountered throughout the cave, some still quite fresh, not yet covered with a layer of dust, which indicates that they have only recently dropped from the ceiling. 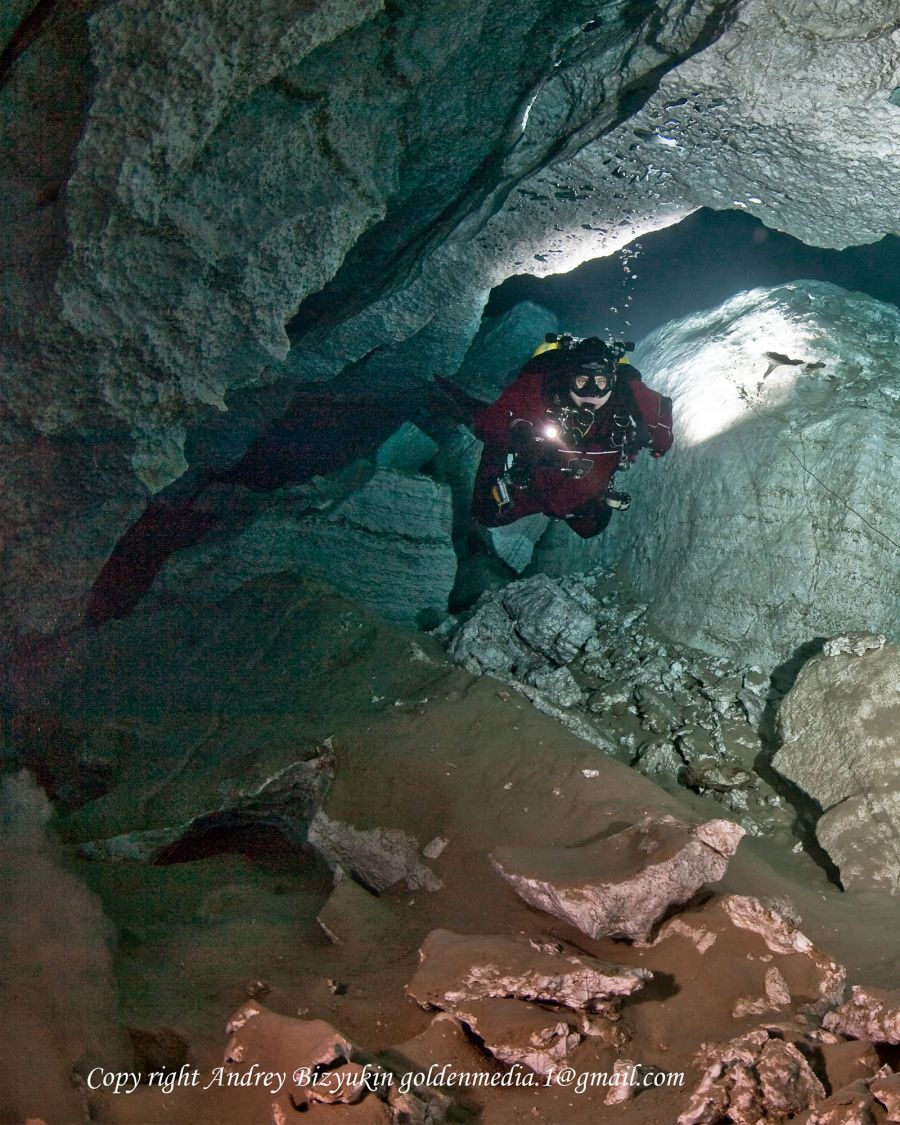 a closely guarded secret
Another thing about the Orda Cave is the legend about gold hidden in the rocks. Local people do not like to talk about it and treat it like a closely guarded secret. It is true in certain places under the ceiling of the cave look like a yellow shimmering stain on the rock but unfortunately, they don’t seem to be gold. In several places of the Orda Cave there are dry rooms in which you can emerge and rest on the rock. When the water level in the Kungur River adjacent to the Orda Cave is low, the same happens in the cave. When this happens the rock formations suspended from the ceiling become heavy, break off and fall to the bottom. This happens most often in spring and autumn. The Ordynska Cave is now a popular place for cave diving training. Pascal Barnabe is here regularly. The place is also adored by underwater photographers, with many publications featuring the beauty of the cave. The article is based on the presentation of Dr Andrey Bizyukin and is a summary of the lecture that took place on February 28, 2015, which was part of Nurges at the Underwater Adventure Diving Fair. Dr Andrey Bizyukin arrived at the invitation of the Nautilus Diving Center.

This email address is being protected from spambots. You need JavaScript enabled to view it.